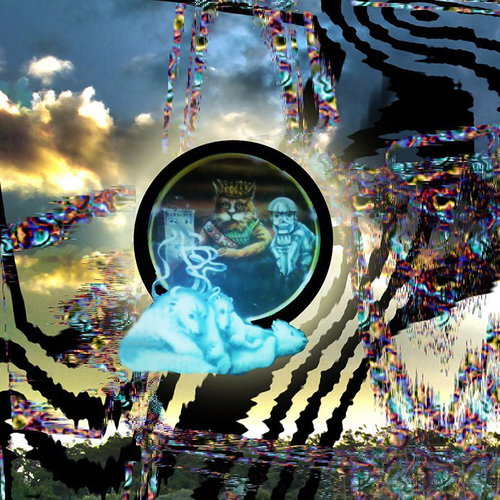 "So as I put an end to Shitmat and temporarily become Tafkas (The artist formerly known as Shitmat) for this singular release I thought it was right to open the proverbial animal cage and let some of my other works free. This is an assortment of music I have made over the last 9 years. The music you hear was made in many different locations and in many different states and states of mind. It was never meant to be collected and released in this way. In fact most of it was never meant for release at all. Just music I made for myself, I did have 100’s of other unreleased nondescript tracks but lost most of them when my seasgate 1tb hard drive passed away.
Unlike the sample based music I am known for, on these works I use other sound sources to build from. It features double bass, live drums, guitar, synthesisers, voice, hardware, lots of different NI Reaktor ensembles and field recordings amongst other things. Some pieces are melodic, others percussive, some down to earth and some out in space. This is many miles away from what you may know me for. There is no pre conceived sound or style on this album; it is truly between a cauliflower and a hard place." - Henry Collins aka Shitmat, Tafkas.
After many years of bringing us laughs, tears and all-out rungleclotted mash-up madness Henry Liam Collins has decided to call his Shitmat project to an end. We bring you a very special release that defines this finale by showing a side to one of our favourite musicians that is not often exposed.
Under the TAFKAS moniker, 'The Artist Formerly Known As Shitmat' presents us with an array of idiosyncratic rhythms, psychonautical atmospheres and virtuosic dirges with melodies ranging in style from the child-like to the ancient. The track selection spanning 9 years worth of work, Shitmat hammers the final nail in the coffin with this sincere eulogy.